Human rights and the rule of law | #Act4RuleofLaw 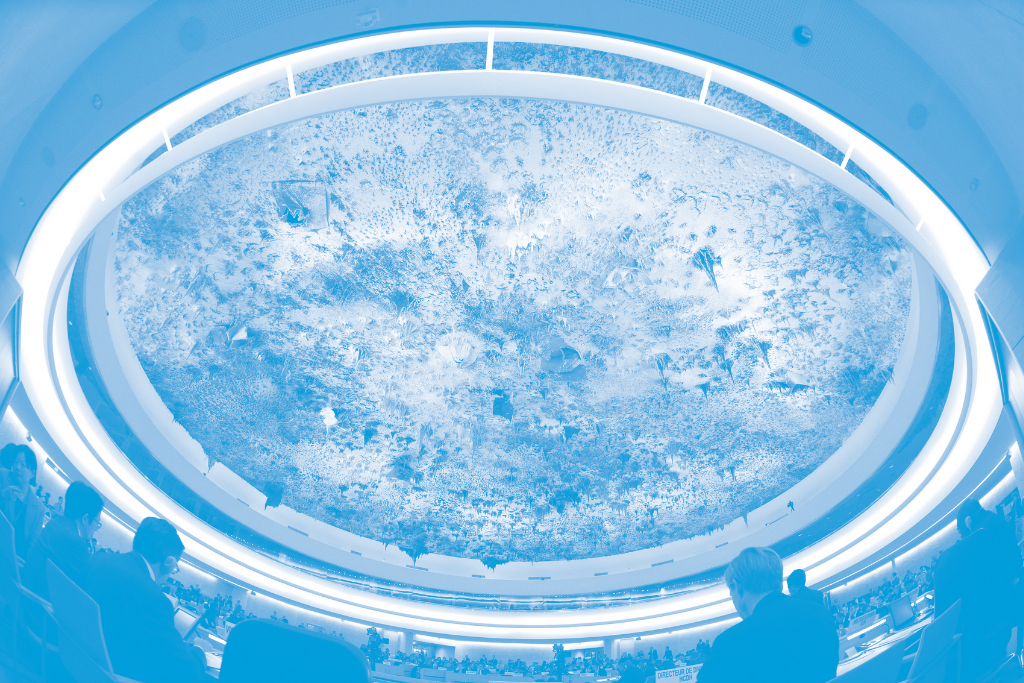 Human rights and the rule of law

The international community has long declared a shared commitment to human rights and human dignity. These principles are enshrined in the UN Charter, which recognizes the “dignity and worth of the human person” and commits the Organization to respect for human rights and for fundamental freedoms for all. Further, the Universal Declaration of Human Rights affirms that the “inherent dignity and the equal and inalienable rights of all members of the human family is the foundation of freedom, justice and peace in the world”1. Importantly, the Declaration recognizes that it is essential, if people are not to be compelled to rebellion against tyranny and oppression, that “human rights must be protected by the rule of law.” 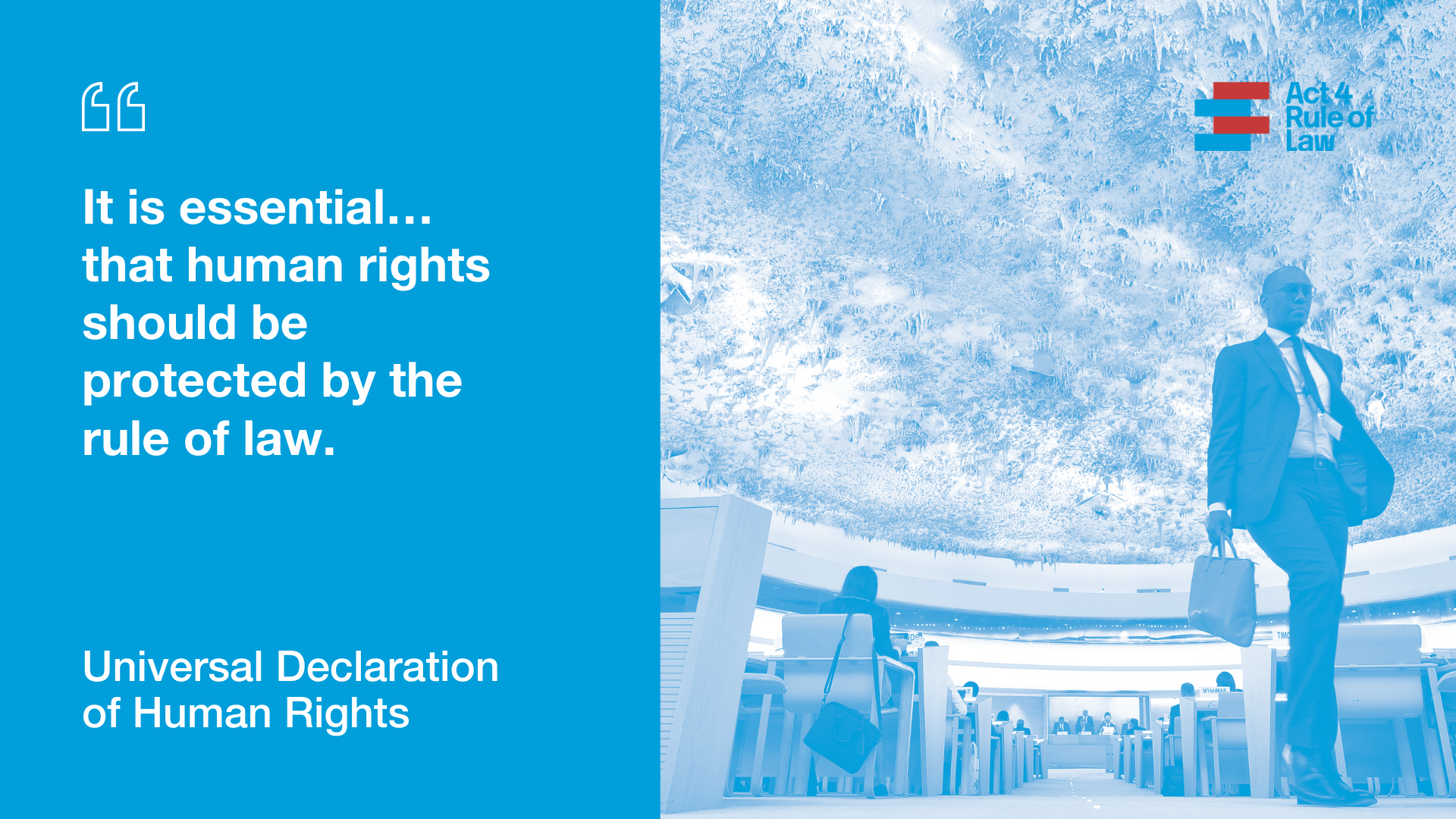 The idea that we are all “born free and equal in dignity and rights”2 is central to human rights, as is the recognition of the diversity of humankind, and the principle of non-discrimination, which ensures that individuals are entitled to all human rights without distinction of any kind, including: “race, colour, sex, language, religion, political or other opinion, national or social origin, property, birth or other status”3.

Building on these concepts of equal human dignity and non-discrimination, the rule of law is predicated on ensuring equality before the law - which means that all are subject to the law, and all enjoy the equal protection of the law.

Justice sector actors and institutions play a particularly important role in upholding the rule of law. This includes the establishment and maintenance of a strong and non-discriminatory legal, policy and institutional framework to ensure accounability for perpetrators and redress for victims for violations of human rights, as well as ensuring that justice is both fair and accessible to all.

Despite the density of justice needs globally, individuals very often face challenges in accessing justice. Some even endure harm as a result of their contact with unfair justice systems. The various challenges that lead to compromised justice processes and outcomes include: discrimination; lack of services; poverty; inequality; corruption; the criminalization of victims; deficiencies in law or procedure; undue delays or overly rushed processes; overreliance on punitive approaches; and harmful stereotypes or social norms that bear discriminatory effects.

Human rights-based approaches to the development and the exercise of legal, institutional and operational functions are an important means of reognizing and redressing the stuctural inequalities and pervasive forms of discrimination that may prevent marginalised groups from accessing justice and equal protection under the law.

The human rights of individuals in contact with the police and/or the criminal justice system may be breached in situations where there are deficits in oversight and accountability; where structural racism or discrimination exist; where corruption is prevalent; where the criminal justice system is used to address social issues rather than crimes against persons or property; where structural elements imperil wellbeing (in dilapidated or overcrowded prisons, for example); or where statutory or discretionary mechanisms result in punishments that constitute torture or cruel, inhuman or degrading treatment.

To uphold human rights, and to facilitate equal access to justice for all, the actions of criminal justice actors must be in accordance with the law. This includes ensuring that the exercise of their functions accord with internationally agreed rules, minimum standards, and accountability mechanisms (for example, with respect to the use of force by police, and minimum standards for the treatment of prisoners).

Trust in public institutions and official functions is undermined by inequality and discrimination. This serves as an important reminder of the importance of promoting human rights and the rule of law as a fundamental part of the development agenda of every country.

The international community has recognized that the rule of law and respect for human rights are mutually interdependent, with SDG 16 articulating the role that the rule of law plays in achieving peaceful, just, and inclusive societies. SDG 16 promotes the importance of effective, accountable and inclusive institutions at all levels, and sets target 16.3 to “ensure equal access to justice for all”. Key to the success of this target is the reduction of rates of victimization and ensuring that victims have access to justice. And it is important to recognize that achieving these targets requires consolidated efforts to achieve all SDGs. For example, considerable progress is required in achieving SDG 5, gender equality, and SDG 10, to reduce inequality, in order to reduce victimization and dismantle the structural impediments to accessing justice.

But the most essential role of the rule of law in protecting human rights is in its check on power. There can be no human rights if the actions of government or corporations or other powerful actos are left unconstrained by the law. At the heart of the rule of law is the idea that no one is above the law, and no one is beneath its protection. That the rights of the imporveished, the minority, the migrant, the prisoner, will be protected against assaults even by the most powerful, the most wealthy, and by the government itself. In this sense, the rule of law is both sword and shield in the cause of human rights.