What is the rule of law defined by the UN? | #Act4RuleofLaw

What is the rule of law?

For many, the rule of law can be an elusive concept. It is easy to relate it to other ideals, such as justice, or more specific things such as legislation or crime prevention. The actual meaning, however, often escapes peoples’ minds. The rule of law can often also be confused with other ideas that do not fully relate to its meaning, such as rule by law. At the United Nations, however, the rule of law is treated as a concept encompassing a set of interdependent ideals, such as accountability, transparency, the protection and promotion of human rights and participation – to name a few. 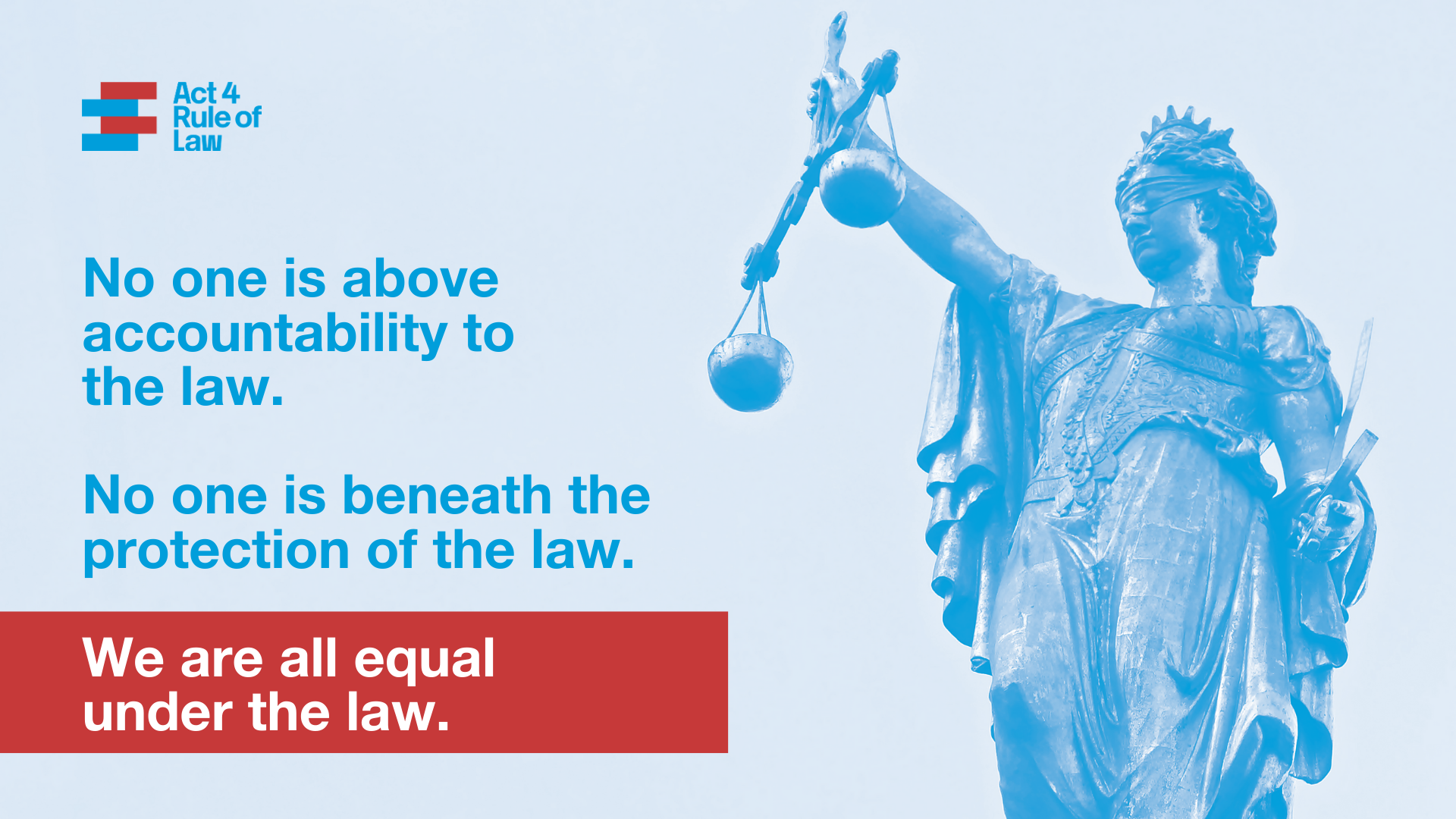 According to the Secretary-General, “the rule of law is a principle of governance in which all persons, institutions and entities, public and private, including the State itself, are accountable to laws that are publicly promulgated, equally enforced and independently adjudicated, and which are consistent with international human rights norms and standards. It requires measures to ensure adherence to the principles of supremacy of the law, equality before the law, accountability to the law, fairness in the application of the law, separation of powers, participation in decision-making, legal certainty, avoidance of arbitrariness, and procedural and legal transparency.”1

At first, this concept may seem difficult to grasp. For this reason, it is important to break it down and delve into its various constituent elements – or layers. The first layer concerns accountability, which depends on and supports laws. These laws, for their part, must follow certain standards. The different powers – executive, legislative and judiciary – each have a role in supporting and ensuring accountability. Finally, these different layers are complemented by cross-cutting elements such as transparency, fairness and the supremacy of the law.

First in this set of layers, accountability is central to the concept of the rule of law. On the one hand, it refers to everyone, no matter how powerful or wealthy, being held accountable to the law. On the other, it relates to the question of participation, thereby creating an active role for people in supporting these accountability mechanisms. The first aspect of accountability, however, is also linked to the avoidance of arbitrariness. Accountability before the law means that the applicable laws establish the standards against which everyone will be held – within a city, a subnational political unit or at the international level.

The existence of accountability before the law prevents a gap in the standards against which all are to be checked. This situation is the essence of arbitrariness, where the criteria, norms and standards, as well as how everyone is to be held accountable, suffer from interference at various levels, from various sources. Such interference may also exist for purposes which not necessarily representing the best interest of the State, its peoples, entities and stakeholders – or, more broadly, the international community. For these reasons, accountability before the law is also a safeguard against arbitrariness.

Next, we should consider a central aspect of the rule of law: laws themselves. Accountability before the law places legislation at the core. The United Nations definition connects important aspects of these laws. First, we need to consider their purpose. Laws regulate different aspects of social life, ranging from substantive aspects of order, to procedural matters as well as how to address their breach. Regardless of their purpose, laws must be consistent with international human rights norms. As a result, the rule of law cannot be dissociated from promoting and protecting human rights.

Participation in decision-making is another key aspect of laws and refers to how they are made. Participation may be direct or indirect (for example, through elected representatives in a parliament or congress). It is a requirement of the legislative process and ultimately guarantees that laws represent the collective will of the people. Furthermore, participation in decision-making is a substantive right on its own, enshrined in international human rights law.

The law must also be clearly known and accessible to all, in the sense that everyone can have the capacity to be aware of its content. This not only allows everyone to know what they are expected to do according to the law, but it also creates a condition in which, by knowing their content, everyone can promote accountability before the law. In other words, transparency supports the rule of law by ensuring that people know the content of the law, can be expected to act accordingly, and may also support accountability mechanisms by knowing what to expect of everyone else.

Understanding the rule of law requires us to come back to the issue of accountability to the law – more specifically, to how this accountability is enforced. The concept of the rule of law has two principles that guide the application of laws. The first is equality before the law, which means that whoever might be held accountable will not be treated differently regardless of race, gender, language, religion, wealth, or other statu,. all must have equal access to justice and its mechanisms. The second principle is that of fairness, which complements equality before the law.

Accountability before the law also concerns the judiciary, which has the role of determining the validity and appropriate resolution of the laws’ application. A key requirement of the judicial power is independence. This ensures freedom from undue interference and which may bring in considerations that are external to what is contained in the applicable laws, ensuring their supremacy and securing non-discrimination. When decisions are taken in accordance with the law, everyone is able to understand and foresee what outcomes should be expected not only of the law itself, but also of its interpretation, application, and enforcement. This is called legal certainty. For this reason, transparency plays another critical role, ensuring clarity on how judicial decisions and reasoning are made, while allowing for accountability and scrutiny of the decisions of the judiciary itself.

A final aspect related to the rule of law is the separation of powers. As has been seen, while the independence of the judiciary is essential, the executive and legislative branches must also function as separate powers under the law, in order to adequately perform their legitimate State functions.

Distinction between the rule of law and rule by law

The rule of law must never be confused with mere rule by law. Indeed, history is full of cases where racism, persecution, torture, and even genocide have been carried out under repressive laws adopted by various Governments. In this sense, rule by law is nothing more than the exercise of power under the colour of law. Such an approach does not promote accountability for the powerful, protect the vulnerable, or uphold human rights, regardless of the process followed for their adoption or publication. The rule of law, on the other hand, ensures fairness, justice, equality, and legitimacy in both process and substance, providing a firm foundation on which to base a peaceful and prosperous society.