Gender and the rule of law | #Act4RuleofLaw 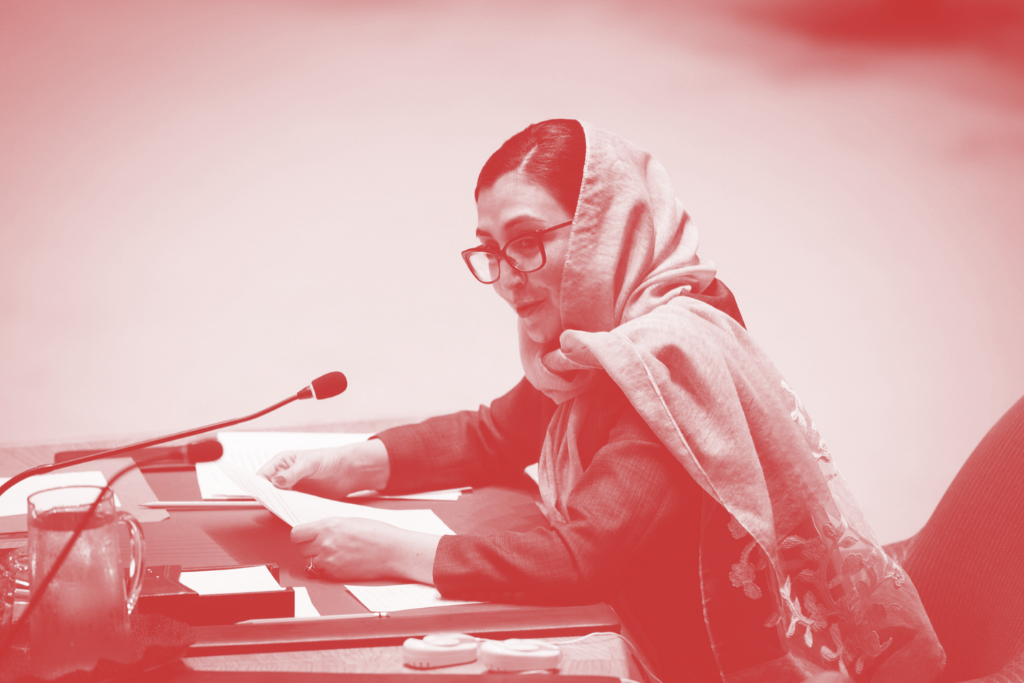 Gender and the rule of law

The rule of law extends the dual promise that all are subject to the law, and all enjoy equal protection under the law. The human rights principles of equal human dignity and non-discrimination underpin this international commitment to equality before the law1. Yet in practical terms, we know that alarmingly high rates of gender-based discrimination and violence persist, globally, and that women and girls face profound barriers to accessing justice. As noted by the CEDAW Committee, gender stereotypes, stigma, harmful and patriarchal cultural norms, and gender-based violence adversely impact on the ability of women to gain access to justice on an equal basis with men2. These gendered harms compromise justice outcomes for victims, witnesses, defendants and prisoners at all stages of the criminal justice system. 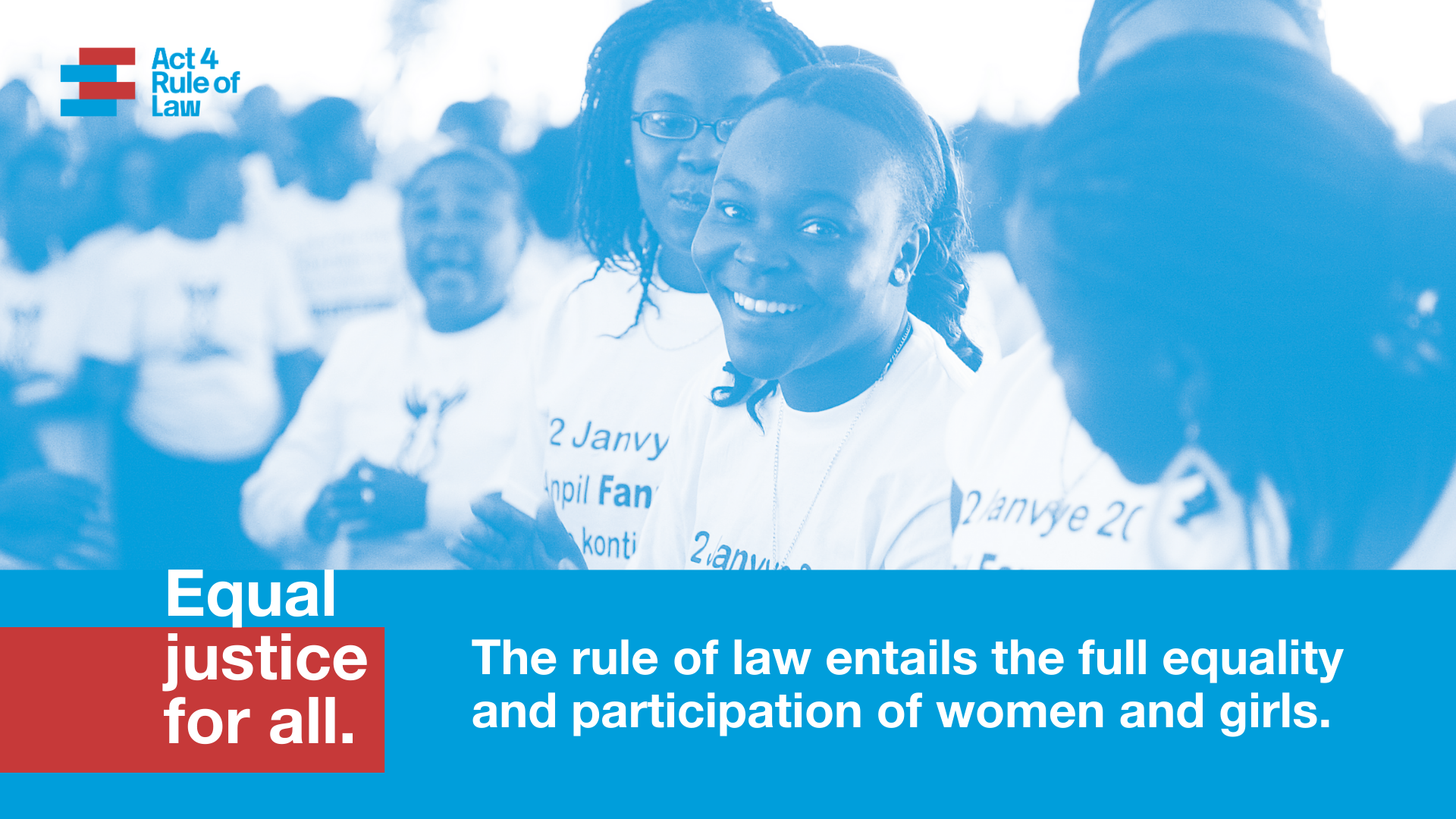 Equal access to justice is compromised, and the rule of law undermined, when the gendered inequalities and discriminatory social structures and practices prevalent in society result in discriminatory laws or gaps in legal protection. For example, failures or gaps in the criminalization and effective prosecution of gender-based violence means that victims are denied justice, and perpetrators enjoy impunity. This erodes public trust in criminal justice institutions and their role in upholding the rule of law. Ensuring gender-sensitive law, policy, and practice is crucial to preventing secondary victimization, and to preventing a deepening of gendered inequalities and gender-based violence.

Fair and human treatment for all persons in conflict with the law is key to ensuring public trust in criminal justice institutions and the rule of law. Yet we know that structural inequalities and discrimination create unequal conditions with respect to the pathways by which women come into conflict with the law. Examples of discriminatory legislation and policy include the criminalization of forms of behaviour that are not criminalized or punished as harshly if they are performed by men, e.g., premarital sex, adultery and prostitution; and the criminalization of forms of behaviour that can only be experienced by women, e.g., abortion, even when undertaken on medical grounds. Further examples include the criminalization of behaviours which are not crimes by any international legal standard, e.g., running away from home without permission, or failure to respect modesty and dress codes. Additionally, the economic disadvantage that arises from structural discrimination means that women are dispoportionately affected by laws and policies that permit the imprisonment of women for petty offences, and women are disproportionately likely to be unable to pay bail in such cases.

In addition to gendered harms of discriminatory legislation and policy, women in conflict with the law are adversely affected by a range of deficits in gender-sensitive criminal justice practice. In most jurisdictions, the majority of police officers are male and not trained in gender-sensitive interviewing techniques. Women who are held in pretrial detention suffer trauma due to the likelihood of losing their jobs and family contact being interrupted. Judges do not sufficiently rely on social services reports to identify mitigating circumstances for women offenders and, as a result, are often not aware of women’s relevant history and background (e.g., history of abuse or violence) and do not apply alternatives to imprisonment even when appropriate. Imprisonment creates unique challenges for women (e.g., gender-specific hygiene and health-care needs), with pregnant women and women with children being particularly affected. Women prisoners are at a particular risk of sexual violence and other forms of abuse. Upholding the rule of law, and achieving equal access to justice for all, requires a gender-sensitive approach that recognizes, and redresses discrimination and structural inequalities of this kind.

Effectively dismantling the discriminatory structures that compromise equal access to justice requires a recognition that gendered roles and attributes are both socially constructed, and potential grounds for discrimination and violence for all (women, men, and individuals who choose to identify as a third gender, gender neutral, or gender fluid). In the broadest sense, the reform needed to ensure equal legal protection for all includes repealing discriminatory law and enacting legal protections against discrimination on the grounds of sex, gender, sexual orientation, or sex characteristics.

Globally, a vast array of discriminatory laws, practices, and harmful stereotypes are imposed upon individuals who identify as, or are perceived to be, lesbian, gay, bisexual, transgender, or intersex (LGBTI). These include: entrenched forms of heteronormative bias in community, school and work settings; legal prohibitions on certain sex practices; legal prohibitions on freedom of expression, including freedom of speech and freedom of association; homophobic hate speech; and homophobic hate crime, including physical violence and killings. Further undermining the rule of law, and the promise of equal protection under the law, LGBTI persons are often denied justice, or subjected to further violence as a result of contact with criminal justice institutions or professionals.

Building and maintaining a gender-diverse criminal justice workforce, and training all justice professionals on non-discrimination, gender-based violence, and gender-sensitive law, policy and practice, is key to to redressing the implicit and explicit bias that perpetuates discriminatory and harmful outcomes within the criminal justice system.

While reforms to ensure effective, accountable and inclusive justice institutions are important, upholding the rule of law requires the promotion of non-discriminatory laws, policies, and practices more broadly. Equal access to justice is contingent on equal access to education, equal access to healthcare, and the promotion of equal opportunity for participation in all levels political, public and economic life. In other words, redress for the gendered inequalities in law and justice must be part of a holistic approach to redress the multi-faceted forms gender inequality in every sphere of society.

The rule of law is an inherently inclusive concept. In clarifying the equal legal obligations and rights for all, the rule of law applies to all – at every level of society. For this reason it is important to recognize that, in addition to the obligations on criminal justice institutions, each one of us has a role to play in upholding the rule of law. There is much work to be done, in society, to challenge harmful gender stereotypes and attitudes that foster the conditions for gender-based violence, or seek to excuse or minimise this violence. Formal and informal values-based education has an important role to play in promoting both the principles, and the practice, of equality, non-discrimination, and equal access to justice.